Integrating Data into Joomla From Wordpress

In 2010, Blue Bridge was approached by a Midwest marketing firm with high profile clients. They were executing a project for one of these clients and had devised a solution that was primarily based upon Joomla, but also made use of a Wordpress blog. They were seeking a strong Joomla developer with experience developing using both Joomla's and Wordpress's conventions.

The marketing firm told us, "We need an extremely FAST, secure, highly stable, customizable, well thought out and executed system..." They wanted it to provide a seamless experience from a user's perspective. Additionally they said, "I am not looking for a quick fix nor do I want an adequate solution...We expect and only want the absolute best."

There were two major features of the integration: they wanted to show blog posts from Wordpress linked in a module and they also wanted this content to be searchable using Joomla's JXtended Finder search component. Additionally, they had a laundry list of requirements as to how they wanted this to work. They planned to release the the solution to the community, but hadn't anticipated the cost it would take to launch a feature rich solution (Most extensions grow their feature set over the course of several years supported by paying customers.)

We worked with them to identify what was key to their client's success both then and in the future, advising them on what features were expensive and which could be implemented cheaply. Additionally, we explained why this was and how to approach the project to make the best use of their budget.  We used simple mockups and diagrams to explain key technical aspects in order to ensure that we both understood eachother and what would be built. 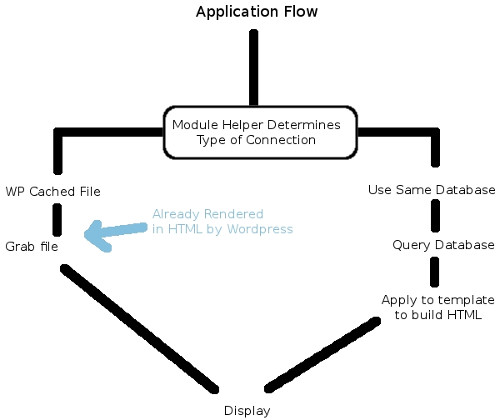 We created a module for displaying the blog posts capable of working off either cached Wordpress files or a shared database connection.  Additionally, it used Joomla's conventions and was themable with one theme already implemented for their client's site.

The JXtended Finder portion of the project was more challenging because it was an extension we hadn't worked with previously and also because it was large, complex, and designed to only search and display Joomla content. I've seen many developers in similar situations just hack the core extension files and claim later that was the only way to make things work. This always causes integration issues in the future when security or feature updates are needed.  Instead, we took the time to read through the code and develop a bespoke plugin to work within JXtended Finder's architecture. And, because page load times were a concern, we used CRON jobs to implement the plugin's indexing and included the needed files and instructions on how to implement this portion. Finally, we included a layout override for them to use on their client's website to work around an inherent limitation in the component's results display (in that it wasn't designed to index two web applications.)

Your Tech Advisor Is Ignorant

Why Joomla is Technically Superior

Why It's so Tough To Find a Good Joomla! Developer

Why Custom Development Isn't the Only Option